The Eggsploder is a weapons class that uses the RPEGG rocket launcher. It was added into the game in November of 2018. Later in the same month, the class was rebalanced — bullet capacity was updated to maximum storage of 3 rockets, and a newly updated scope was implemented. For the bullet to actually explode the opponent needs to be a certain distance away from you.

The Eggsploder class can blow up an opponent (or multiple opponents) with a single explosive shot. However, shooting is disabled if the target is too close to the player. A certain amount of distance is required for the bullet to explode so it’s better to have some experience with the pistol first since close-range combat is basically disabled for this gun. If the bullet does not explode, the bullet will deal ten damage.

This gun has the farthest range but has the slowest bullet speed. The best tactic to use in this situation is to practice timing with the gun. When used correctly, It can become especially devastating at all ranges.

In theory, you can kill your self with this gun with you shoot from a high place and land on the rocket. Maps with a high tower can be good for this.

This gun makes a player very vulnerable to short-range guns such as the Whipper and the Scrambler since it cannot be used at short range. In such a situation, the best option to use is the secondary pistol or run to a ladder and drop a grenade,

The RPEGG may become first-priority targets for experienced enemies, as they know the potential danger of a player that wields the RPEGG. RPEGGs may face short-range gunners constantly going after them. Try to avoid face-to-face combat as much as possible, make sure to not stay in one area for too long, and try to hide from others' views as much as possible, to prevent snipers from aiming at you, or short-range gunners from running after you.

A good strategy for the RPEGG to provide great support for their team or to gain kills is shooting at faraway, crowded enemies. In FFA, if you spot two or more brawling enemies, especially when both/all of them are somewhat damaged, shoot at their general direction, and you will likely get one or more kills from it. In Teams Mode or Captula the Spatula, shooting at a crowd of enemy team members will produce a similar effect. Even if you don't get kills from it, you will still provide great support for your team in sustaining the top of the leaderboard. 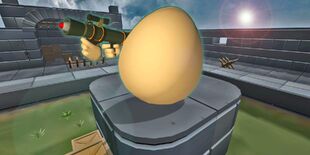 Tip of the day
Community content is available under CC-BY-SA unless otherwise noted.
Advertisement