The Free Ranger, sometimes known as the CSG-1, is a weapon class that is a sniper rifle, which, unlike the Crackshot, has 15 bullets in a magazine. The Free Ranger does less damage per shot than the Crackshot and has a slightly slower bullet speed. It appears to be based on the Dragunov sniper rifle. This gun was the only sniper in the game before the Crackshot was introduced in Version 0.20.0. The two weapons are different, however, since the Crackshot is generally one-hit-kill while the fires multiple rounds before reloading. If you shoot very accurately and hit the very center of the egg, it is expedient to kill in one shot, however, killing a moving opponent in one shot with the CSG-1 is very rare. The CSG-1 has a relatively low recoil time, allowing it to kill an opponent in less than 2 seconds.

The Free Ranger class is meant to be used for long-range combat. When aiming, the gun zooms in with a scope. This scope zooms in a further amount closer than when out of the scope, to aid in long-range shooting. It is usually used to get people low enough, however, if the shot is exactly in the center it can kill the person in one shot.

This gun is one of the three original guns in Shell Shockers. When it was first added, it only had five bullets per magazine and 15 storage bullets. The gun originally could carry 15 extra bullets and could only use five bullets before reloading, but this was upgraded to 60 when the Crackshot was introduced in Version 0.20.0, as to separate the two very similar sniper guns apart from each other. The damage was also increased and the bloom/instability of the gun was also decreased later. Over many updates, the CSG-1's accuracy and statistics has changed many times. In Version 0.39.2, the reload time was decreased and the fire rate was increased slightly. 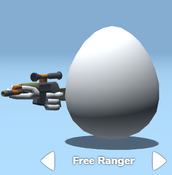 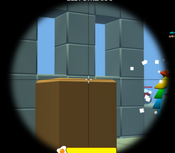