The RPEGG is the weapon used by the Eggsploder class. It is based on an RPG (Rocket-Propelled Grenade). It is the only rocket launcher in the game and has the lowest storage capacity. The rockets have different functions in the game than bullets. When aiming, the gun uses a scope to zoom in.

The RPEGG specializes in taking out groups of people from a distance. It also has the ability to deal damage around corners and clear passages, therefore making it powerful in large indoor areas like tunnels. Its major drawback is its remarkably insufficient close quarters' abilities, therefore making the Cluck 9mm important to learn before using the RPEGG.

The RPEGG is a missile launcher and the largest of the weapons. It can hold up to 1 bullet/rocket at a time, one bullet/rocket in the chamber, making it the lowest capacity weapon in the game. Because of this, you have to find a place with a good view and lots and lots of ammo and that place can be hard to find.

The RPEGG's rocket has very high spray and damage. When firing, the player finds and calibrates the target with a box-shaped target. If the box is red, the target cannot be hit and the rocket will fire but not explode and will do ten damage. If it is green, it is a far enough distance and can fire (Sometimes if it’s very close to red it won’t fire). If the rocket lands on an opponent unexploded it will deal 10 damage. You should fire the rocket about .5 seconds before the target is where you are aiming, depending on distance between you and enemy. Once the rocket is fired, the rocket fires and trails behind smoke. Upon impact, it has very high damage and splash damage. Similar to the M2DZ, The RPEGG is best used on large maps with far ranges. The rockets speed is not very fast though so your opponent will have some time to dodge. If your target has ground around then try to make the bullet explode instead of flying outside of the map. If you bullets lads on the floor close enough it will at least do some damage instead of none if you shot it out of the map.

Before Version 0.15.4, mid-November 2018, the scope of the RPEGG was identical to that of a CSG-1's and players were allowed to shoot while moving. 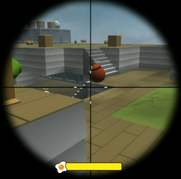 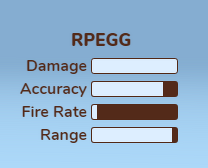 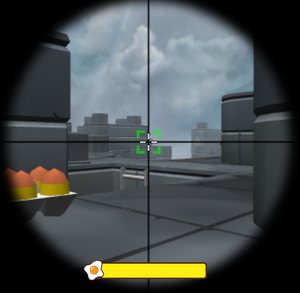 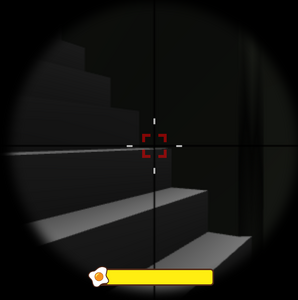 RPEGG is a grenade launcher so it's very powerful!

Here there is a name, picture and and a way to get the item listed here for every RPEGG.

Community content is available under CC-BY-SA unless otherwise noted.
Advertisement